What DECISION means, a philosophical history since 1977 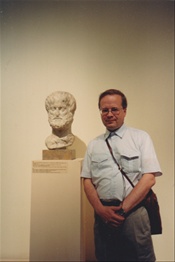 In the picture a new doctor visiting Athens to see Aristotle, the philosopher of Practical Syllogism.

MOTTO: The essence of ultimate decision remains impenetrable to the observer – often indeed, to decider himself…. There will always be the dark and tangled stretches in decision-making process – mysterious even to those who may be most intimately involved.

This dissertation was written as a disputation criticizing positivistic philosophy of science, especially as a foundation for social sciences like the study of administration. Its background is in the philosophical and political situation in the mid 1970’s – in several ways reflecting to where we are today.

In the 1960’s and 1970’s or in the middle of the Cold War, The Wiener Kreis tradition of philosophy of science was returning back to Europe from its exile to the US. It was establishing itself on both continents as the mainstream academic philosophy. Since then there have been important turns under the influence of critical realism and pragmatism, but the basic presupposition of methodological monism in the sciences still holds its strong position.

At the same time, philosophical monism or naturalism have become integrated parts of the deeper European Enlightenment tradition seen by many, in Jürgen Habermas’ words, as un unfinished project — in fact serving also as the ideological foundation of the European Union finalité itself.

However, at the same time the “later” Ludwig Wittgenstein of “Philosophical Investigations” has inspired critical self-reflection — under titles such as “hermeneutics” also in analytical philosophy, first in the works of scholars like G.E.M Anscombe, William Dray, Peter Winch, and G.H. von Wright.

Since Eino Kaila, philosophy in the University of Helsinki had been dominated by analytical philosophy. However, in the early 1970’s G.H. von Wright opened a debate on practical reason in a critical spirit. At the same time the post-1968 current of Marxism gained a lot of support among students in several faculties of the university, but not so much in philosophy. One of the reasons was that von Wright’s thinking encouraged younger students like me to follow a “centrist” or third way complementaristic view. According to it, both the causalistic galilean tradition and the teleological or intentionalistic aristotelian tradition are needed as the foundation of the social sciences — and of life. For instance, this dissertation met some concerns in the mainstream Finnish thinking of the time but von Wright himself gave time and support for it.

Professor Jaakko Hintikka is another internationally well-known scholar who gave support to this project. He opened the way to one of the most dynamic places of philosophy of science at the time — Boston University — with Robert Cohen as my academic advisor and Marx Wartofsky as one of the major professors. Fortunately also Alasdair MacIntyre was in the house and gave me some most valuable advice.

When I arrived at Boston I had a readymade plan to develop Aristotle’s and von Wright’s practical syllogism into a model of decision making. This plan gained even more motivation when I learnt what was happening in the J.F. Kennedy School of Government at Harvard.

The academic year 1975–1976 was still post-Cuban Missile Crisis and post-Vietnam War time at Kennedy School. The real danger of global nuclear catastrophe and the more recent national catastrophe in Vietnam had created an intense critical discussion in that academic institution close to practice. There Graham T. Allison and John D. Steinbrenner held classes based on their newly published books on decision making. Being a Fulbright student and having a letter of recommendation, I was accepted to audit them.

The basic work for this dissertation took place in that academic environment. After my return back to Finland the work continued for another year and the result was presented as a doctoral thesis at the University of Jyväskylä in June 1977. After that my career was mainly in public administration, finishing as the Prime Minister’s State Secretary in June 2010.

However, one of the core questions was left open in this dissertation, as much as it seems to have concerned von Wright in his later works. It was the relation between the premises and conclusion in the Practical Syllogism — and more broadly, how is practical reason possible. In fact this question itself challenges the mainstream monistic and Enlightenment currents because these traditions take it for granted that humans are in some way readymade for practical reason — if only filled by a certain amount of information.

These questions have kept my philosophical interest alive through these years. Then, after having retired, I have had more time to have a look at what has been accomplished by professionals in these “von Wrightian” questions, and I have recognized that it is not very much. It is true that there has been a lively academic work on practical reasoning or on action theory, but its main bias seems to have been to translate von Wright’s main sui generis questions and conclusions to a monistic-naturalistic framework.

However, this holds only for the mainstream philosophy of science. The questions of how decent practical reasoning and practically wise life are possible have been the core questions in the currents known as post-structuralism or post-modernism in Europe and neoconservatism in the US. All of them seem to take it for granted that a practically reasonable, just or balanced mind is a historical product. However, their conclusions have been opposite to each other. The one is saying that the end result or modern mind should be deconstructed and the other is saying that the formative traditions of this modern or Western mind should be revitalized to preserve it — but unfortunately, according to many of them, at the cost of taking distance from the Enlightenment.

My own postdoctoral philosophical writing has come to the conclusion that human practical wisdom is somehow originally or potentially in the human constitution but it has become real only through historical or cultural development. Therefore to avoid repeating its deconstruction like in the tragedies of the 1930’s we should integrate in a complementaristic way its formative (Christian, classical and socially humanistic) “Bildung” and Enlightenment cultures.[1] Perhaps needless to say, this conception became founded already in this dissertation.

It may be unknown outside the Nordic countries that in the late 1980’s G.H. von Wright gave lectures and published articles making strong cultural and ecological criticism of modern culture and society based on monistic scientism. He even defined his political program as “social humanism.” These public interventions, however, faced exceptionally strong criticism from the mainstream scientific community. Only recently I have learnt that von Wright met a parallel if more polite experience also with his “Explanation and Understanding” as well as with his “complementarism” — the basic elements inspiring this study.

Paradoxically or even surprisingly G.H. von Wright’s complementaristic legacy has not been developed on any broader basis except by some interesting scholars like Frederick Stoutland in Uppsala and Thomas Wallgren in Helsinki. This does not mean that some other interesting but basically monistic interpretations would not have taken place after von Wright, like for instance Raimo Tuomela’s work.

Another paradox is that Allison’s and Steinbrenner’s works became a permanent literature in administrative and policy studies, but the problems they treated have only been repeated in governmental-administrative practice. After 9/11 and after the wars in Iraq and in Afghanistan the old questions of misperceptions and bureaucratic problems in decision making have been repeated in literature, almost like after the Cuban missile crisis, the Vietnam War or the Skybolt decision 40–50 years ago.

It is difficult to say whether I will be able produce something more or new on these questions. However, I hope the digital edition of this doctoral dissertation could help reintroduce the critical question of the serious limits of mainstream monistic philosophy of science as the foundation for social sciences, for our understanding of our social life and for our making decisions on it.

This does not mean that I would favor an “anything goes” approach, which together with weakly founded non-analytical “hermeneutics” can create academic or administrative orientations which accept “soft methods” with soft results. What I mean is that a well-founded understanding of human practical reasoning and its practical decision making (PDM in this study) could offer a well-founded basis for analytical hermeneutics and for a complementaristic methodology of human and social sciences, as well as administration. After all, the model of scientific practice or verification is a special case of the deeper model of practical reason covering broadly human experience.

Given the fact that this text is a doctoral dissertation, there are no textual changes in it compared to the first edition in 1977. In order to help reading, two subtitles have been added and several all too long paragraphs have been divided. Some of these changes are based on remarks from the official academic opponents of the time. I am grateful to the University of Jyväskylä for giving me permission to publish this digital edition.

[1] [1] Risto Volanen, COMMUNICATION, THE RISE AND RISK OF FALL OF MODERN MIND; https://www.academia.edu/5202149/THE_RISE_AND_RISK_OF_FALL_OF_MODERN_MIND