The difficult beginning of independent Finland 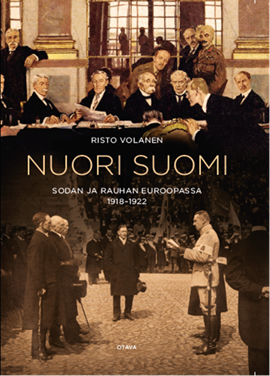 It is sometimes forgotten, that Finland did not become independent of its own power and own right, but was entirely dependent on the events in the outside world. Risto Volanen illuminates in an initiated and detailed way the rapidly changing international game with various treaties and armed conflicts in the power vacuum following the fall of the Russian empire.

One could expect that the plethora of new books during the anniversary year 2017 and the memory year 2018 would be followed up by works that illustrate lesser known stages of Finland's history after that. The latest grant is pol.dr. Risto Volanen's work ”Nuori Suomi soda ja rauhan Euroopassa 1918–1922”.

As the title promises, the former secretary of state sets Finland's first years of independence into a larger international context and guides the reader through the tricky path of international politics and diplomacy at the time of the end of the First World War.

The fact that Finland's process of independence is intimately connected with developments in Russia and Germany is well known, and also described by Volanen in previous books. The Russian revolutions in 1917 gave Finland a chance to break ties with Russia. Lenin counted on revolution in Finland as well, but the peace with Germany in Brest-Litovsk in March 1918 put a stop to further Russian aid to the Finnish Reds in the civil war.

However, the Germans got free hands here; they arrived in April 1918 and Finland was about to become a German satellite state, since the Russian officer C.G.E. Mannerheim was dethroned from the army leadership and German-friendly monarchists such as Svinhufvud and Paasikivi took over the helm. The choice of a German prince as king in October 1918, at a time when Germany had already lost the war, made the future extremely uncertain. Neither Britain nor the United States had recognized Finland's independence.

The fact that Finland did not become independent of its own power and own right, but was entirely dependent on events in the outside world is sometimes forgotten. Volanen highlights and details the rapidly changing international game with various treaties and armed conflicts in the power vacuum following the fall of the empire. Particularly deserving is the attention he attaches to how Finland's situation was affected by domestic political conflicts in both the entente countries and the new peripheral states in the western regions of tsarist Russia.

Volanen points out that state art and diplomacy at the time of the First World War had changed from the emperors' game plan to a more democratic but at the same time more complicated system with various actors involved.

For example, the disagreement between the German foreign ministry and the military leadership played a major role for Finland in 1918. Within the army leadership, General Ludendorff pushed for Finland's liberation from Russia, which the Berlin envoy Edvard Hjelt could pay by providing him with a Finnish passport so he could flee the country. Ludendorff was moved in his memoirs by the sympathies of Finns, but admits that it was purely German and not Finnish interests that drove him.

In Finland, some circles dreamed up a Great-Finland with German help. Expectations came to shame in the summer of 1918 when Germany and Lenin's government supplemented the Brest-Litovsk peace agreement so that the Bolsheviks would expel all the entente's troops from northern Russia while Germany guaranteed that the Finns did not attack Russian territory.

Germany's collapse a couple of months later brought the matter to a new end, and Mannerheim's return as Finland's head of state with, in effect, a dictator's powers, again updated the plan to send Finnish troops against Russia and Petrograd. According to Volanen, Mannerheim seems to have been driven by the idea of overthrowing the Bolshevik regime with the help of the entente and, as a reward for the new Russian leaders, both getting the East Karelia and recognition of Finland's independence.

Less known is how the cracks in the British leadership may have affected Finland's fate. Minister of War Churchill maintained the British presence in Murmansk in 1919 and wanted to attract Finland to do business with the Russian whites, while the London government and Lloyd George finally saw advantages with the Bolshevik government.

Volanen recognizes the previously anonymous officials in the British Foreign Ministry who wanted to make sure that Finland did not interfere in Russia's insecure civil war. He also notes that the fierce internal Finnish struggle in June-July 1919 whether an attack on Petrograd was or was going on at the same time as the Russian civil war was swinging in favor of the Bolsheviks and the anti-friendly troops retreated.

Lenin was ready for peace with the Baltic neighbors; a peace treaty, at the same time, meant recognition of the Bolshevik government as Russia's legal holder of power. The Bolsheviks' dilemma - how they would push for a world revolution to overthrow the governments with which they were at the same time making peace - was not solved until ten years later when Stalin cleared Trotsky. But there was a peace treaty, first with the Baltic republics and then with Finland in Dorpat in 1920 - the peace that extreme right Finnish circles called the "shame peace".

Risto Volanen also makes visible the “activist” Finnish forces that pushed for continued intervention east of the Dorpat peace border, until President Ståhlberg and Minister of the Interior Heikki Ritavuori closed the border for activists' attacks. That the followed internal Finnish hate rhetoric in 1922 led to the murder of Ritavuori at his home door on Nervandersgatan should be a useful reminder of what such can lead to.

The seeds of World War II were sown by the Versailles Peace in 1919. However, it is often forgotten that it defeated Germany and Lenin's Bolsheviks began to cooperate at an early stage, so that the Germans, for example, could develop new weapons in Russia.

The Rapallo Treaty in April 1922 came as a shock to the entente, leaving deep traces of European politics. At the same time, the Finnish-Polish-Baltic Defense Treaty was already signed by Foreign Minister Holsti. Through the government's resignation, and Parliament's personal distrust of Holsti, the border state policy could only be put to end. Did we have occasion in Finland to be grateful for 17 years later?

Volanen also notes the importance of Finnish domestic policy's shift in power towards the center. Moderate forces expelled the radical elements of the Socialist Party and the bourgeois middle forces forced de facto the militant right-wing activists from the power position in side in the summer of 1921.

After President Ståhlberg kicked the Guard Corps Commander von Gerich and neglected the Guard Corps' desire for Mannerheim as their commander-in-chief, the state government's grip on the paramilitary groups in the country was secured. As Ester Ståhlberg noted in his diary: "Mannerheim should not have a private army".

Volanen is based mainly on previous literature and the actors' memoirs. Some direct news for the researchers hardly contains the book, but it offers an opportunity for a deeper understanding of a complex whole. The presentation is intriguing, but the book may not always be easy to read; there are many points of view that should be taken into consideration - and many contemporary threads that the reader should follow.

But neither was the Republic of Finland's first years a single-track story.